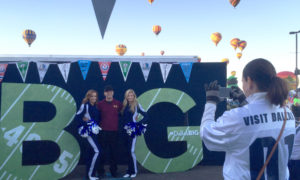 The Dallas Convention & Visitors Bureau knows that big things happen in Texas. But the world’s biggest hot air balloon festival? Well, that takes place each year in New Mexico. What better way to reach people who like to travel big than to attend a tourist mecca? The Albuquerque International Balloon Fiesta draws nearly 1 million visitors, of which 74% are travelers from outside Albuquerque.

Reaching an audience who likes to travel can absolutely be done at other popular destinations. And that’s exactly what the Dallas CVB did!

And to the 26% attending that are native ALBqueans, Dallas is a short plane trip away – making it a great destination for all in attendance! The experiential festival activation actually supported other paid media running in Albuquerque during the fiscal year. The Visit Dallas team wants Albuquerque residents to know that they can find big things in Dallas. A big city experience, big sports, big shopping and big food…and not too far from home.

So during Balloon Fiesta, Dallas decided to have a big presence. 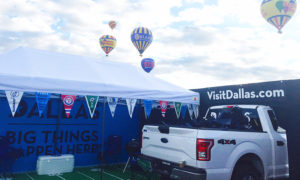 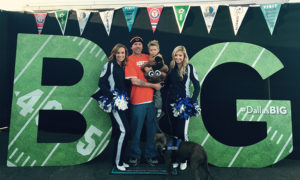 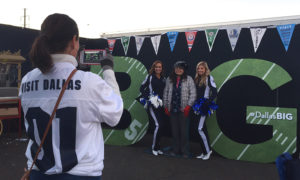 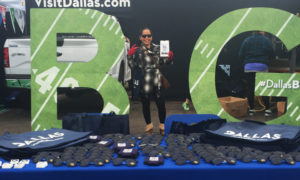 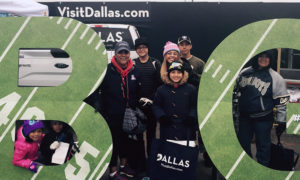 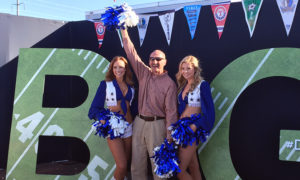 With football season already in full swing, the theme of this event activation was a pre-game tailgating party. Their experiential footprint included a tent with a football field-esque rollout turf on the ground. There were Dallas-inspired hanging pennants and a prize wheel. The experience included a photo opportunity to support their #DallasBig hashtag. You stand between a big B and a big G. (Get it? You put the I in BIG. You put yourself in the middle of Texas.)

In addition, the brand ambassadors wore jerseys with “Visit Dallas” on the backs and talked up things to do in Dallas. They passed out popcorn, as well as the goodies from the prize wheel. Prizes included branded tote bags, koozies, sunglasses and bandanas. Plus, a few lucky spinners won larger gifts, such as: Maverick court-side tickets, a signed Rangers baseball, a tailgate party-worthy grill and even airline vouchers. 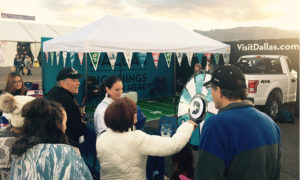 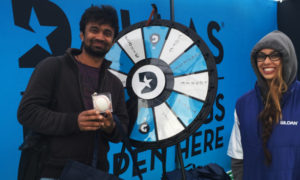 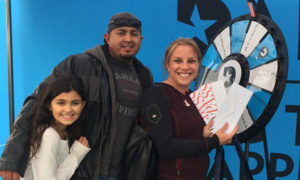 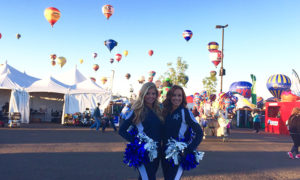 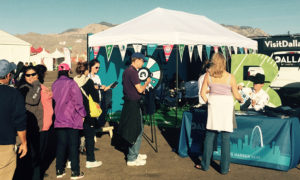 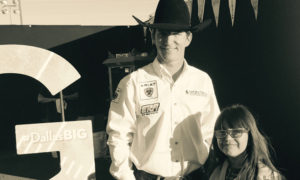 “I feel like my team is creating a real experience for everyone that stepped into our booth,” says the senior national event manager on site. “We made people excited about the city of Dallas and left a lasting impression on everyone we met.”

When time permitted, the team went guerilla style to meet people outside the booth. They intercepted those entering the gates and around the fiesta grounds. The goal was to spread the Dallas love to as many event attendees as possible. They even convinced at least one four-legged pal to consider Dallas for his next destination. 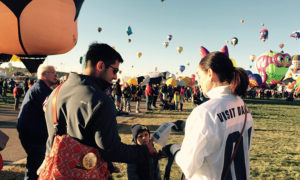 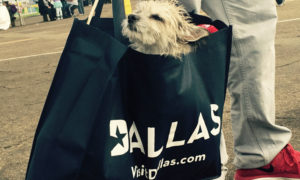 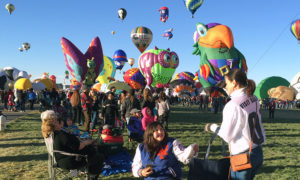 This is a great example of how an event booth doesn’t have to be super elaborate to reap big excitement. It’s about the experience and engaging directly with the target audience.

A few quotes from the field:

“What a cool booth you guys have! This is truly one of my favorites of the whole event!” // Kenneth, Albuquerque

“I have never actually been to Texas. I think Dallas is a great place to start!” // Rita, Michigan

“What’s the best thing for kids there? I think it may be my next family vacation.” // Eric, California

“What a spectacular setup you guys have. It’s really selling Dallas in an amazing way.” // Jesse, Arizona

“Is everything really bigger in Texas? I think I should take my kids there before they get older. Maybe to one of those rodeos you were talking about. Thank you.” // Levi, California

“This was the highligh of my whole trip! I won an awesome BBQ grill, and my girlfriend and I finally agree on a place to visit. Dallas, here we come!” // Chris, New Mexico

The on-site experiential marketing team estimates that the daily impressions were around 35,000 and that the daily consumer interactions were near the 20,000 mark each day.

If you want help going big with your message, we can help.